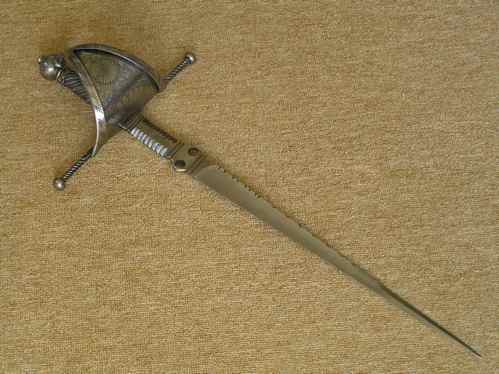 The inseparable friends - fencing and a rapier - experienced accomplishments in the 1st half of the17th century
as indispensable companions through the European society. Simultaneously with them the prosperity
of sword makers´ workshops in Spanish Toledo was thriving, too. During the years 1640-1680 Spanish masters
made their own type of the rapier, the rapier with the bell basket.

Left-hand daggers became an inherent accessory of these rapiers. The dagger of course served primarily for parrying and
breaking the rival´s rapier. Therefore the dagger had round cut-outs in the blade under the quillon, sometimes
two forked spikes in which the rival´s blade could be caught. The basket of this dagger rose from the quillon
up to the pommel as a triangular sleeve with the skilfully bent border having a very prosaic name - ROMPEPUNTAS, which
can be literally translated as a spike breaker.

If a dual was taking place somewhere in a narrow lane or in a corridor, it was not possible to draw the long sword
and the dagger became the only usable weapon.